The KonMari Method and the Four Tendencies: An Introduction (Post 1 of 5) 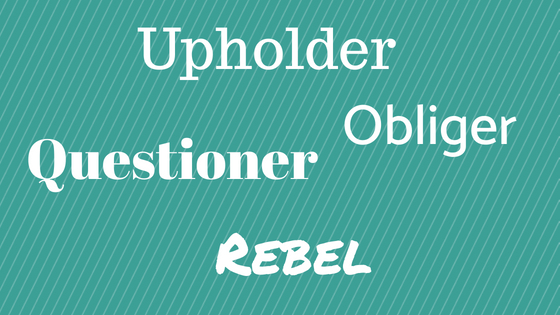 The “Four Tendencies” framework, developed by happiness expert Gretchen Rubin, places people in four categories based on how they respond to outer and inner expectations. This post introduces the framework, and the next four posts in the series will discuss how each of the tendencies can best work through the KonMari process, either on their own or with a KonMari consultant.

Gretchen Rubin originally identified these tendencies when she observed that some people have an easier time maintaining habits and meeting goals than others. For example, she described a friend who had no problem sticking with a running regimen while on a track team but who found it impossible to maintain the habit after leaving the team. From that original observation, Gretchen Rubin went on to identify the four basic ways that people respond to expectations, summarized above.

How does this relate to the KonMari method?  A person who picks up The Life-Changing Magic of Tidying Up and decides to use the KonMari method to declutter can have both external and internal motivations to do so. But depending on the person’s tendency, those motivations can either help or hinder the process.

Angela (not her real name), for example, has been told repeatedly by those in her inner circle that she should really declutter her space and that she would be much happier and more productive if she did. She was never convinced that was true, but she had tried various decluttering methods halfheartedly and never had much success  … until she read The Life-Changing Magic of Tidying Up. Finally, a decluttering expert with many years of experience had explained why her method works and why it has a life-changing impact. From that point on, Angela had no problem using the method to achieve a clutter-free home. Angela is a Questioner whose tendency helped her successfully complete the process.

Beatrice (not her real name), on the other hand, read the book but was unconvinced. Why is she supposed to tackle each category in order?  Why is it so important to fold so many items of clothing?  Why not keep books you haven’t read?  At every turn, Beatrice is stymied by the reasons for the advice in the book. Beatrice halfheartedly begins the process but stalls out as soon as she cannot articulate a good reason for what she is doing. Beatrice is a Questioner whose tendency is hindering her from successfully completing the process.

As you can see from these examples, two people of the same tendency will not necessarily react the same way to a particular obligation or goal.  But knowing your tendency can help you achieve your goals by learning how to motivate yourself to reach the finish line. Angela and Beatrice are motivated by the same things, but Beatrice needs additional information to be convinced to follow through. Readers of The Life-Changing Magic with other tendencies might become frustrated or annoyed with Beatrice’s need for information and seemingly endless research, but Beatrice can achieve success by recognizing what she needs to do to make completing the KonMari process an inner expectation, and the other readers can also aid their success by recognizing and working with their tendencies.

You can take a quiz to determine your tendency here: Four Tendencies Quiz

Once you know your tendency, come back over the next four weeks and you’ll see how I recommend that each of the tendencies work through the KonMari process to minimize their frustrations and enhance the likelihood that they will successfully complete their tidying festivals. First up next week: the most common tendency: the Obliger.